In an industrial corner of Singapore, multiplying steadily in bioreactors heated precisely to 82 degrees, real shrimp meat is being grown from samples of the crustacean’s microscopic cells. Fed a nutrient-rich soup meant to mimic its diet in the wild, a single cell can reproduce over a trillion times into a mound of gray translucent flesh. Think of it as meat growing without all the other parts of the animal, including that chalky black vein.

The venture is being led by Sandhya Sriram and a team of scientists, who are attempting to upend one of the cornerstones of dim sum. Sriram’s company, Shiok Meats, is named after Singaporean slang used to declare something delicious.

Similar work is being done across the world at other startups and research labs to grow beef, pork, chicken and high-end specialty products such as bluefin tuna and foie gras, but Sriram’s company is the only one known to be focused on re-creating shrimp, a staple in many Asian dishes.

Shiok’s finished product — this reporter was unable to try it because no outsiders are allowed to visit its headquarters during the pandemic — possesses the texture of ground shrimp and has already been tested to make shumai, the Cantonese dim sum mainstay with the yellow dumpling wrapper. But its applications are potentially manifold in Chinese-centric cuisine.

Shrimp shumai made with lab-grown shrimp from Shiok Meats.(Shiok Meats) You could layer a dollop of it over a raft of tofu, steam it and douse it with a slightly sweeter soy sauce. It could be squeezed out of a piping bag into a simmering hot pot broth. And it might be the kind of thing you’d want to roll into balls, bread and deep-fry.

Eventually Sriram, who cofounded the company two years ago, would like to move beyond ground shrimp meat to produce crab, lobster and a structured deshelled shrimp, one convincing enough to hang off the edge of a glass filled with cocktail sauce.

Singapore has emerged as a leading player in the budding technology once derided as “Frankenmeat” after Dutch researcher Mark Post unveiled the first “test-tube burger” to a panel of food critics at a news conference in London seven years ago.

Researchers have been able to drive down the price of the meat, which is called cell cultured meat or clean meat, from the nearly $300,000 it cost to produce Post’s debut patty — though not enough to actually sell it to the public yet. Shiok’s shumai, for example, cost $300 apiece.

In what’s been described as an “edible space race,” at least 55 companies worldwide are now involved in developing some variety of cell cultured meat, according to the Good Food Institute, a Washington-based nonprofit advocating alternatives to animal agriculture.

That includes one in Hong Kong that re-creates fish maw or bladder, a delicacy often used in soups; an Australian startup that’s growing kangaroo meat; and a company in China that’s looking to re-create pork in a country where rising demand for meat will test the limits of the world’s supply. Last year, an Israeli startup successfully grew cow muscle tissue on the International Space Station.

The science’s emergence has provoked existential questions about the provenance of meat, prompting vegans to contemplate whether the technology represents a sort of loophole if it doesn’t harm animals, and Jewish and Muslim religious leaders to ponder if the lab-grown pork could be deemed kosher or halal.

Eventually, the technology could allow for novel kinds of meat to be made, presenting chefs with unusual possibilities.

“Imagine when you can tailor the taste of any piece of meat,” said Ryan Bethencourt, the San Francisco-based cofounder of biotech accelerator IndieBio, who provided Shiok with its initial seed funding. “What does pork with salmon fat taste like? What does a mix between Wagyu beef and other heritage beef steak lines taste like? What about meat that tastes both sweet and sour?” 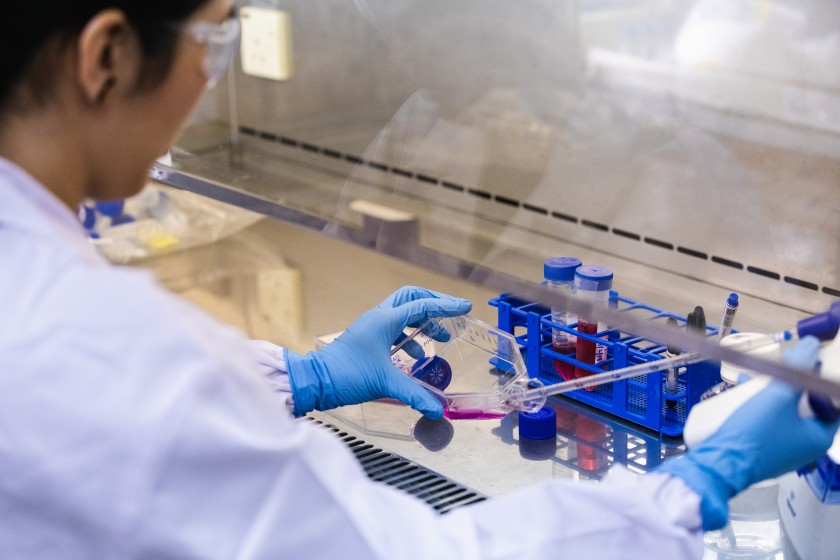 Investors are pouring hundreds of millions into the industry, inspired by the success of plant-based meat companies Beyond Meat and Impossible, which helped demystify alternatives to eating farm animals for a far wider audience than previously thought possible.

Financial backers in the burgeoning field also include giants in the conventional meat industry such as Tyson, Cargill and Bell Food Group. Bill Gates, Richard Branson and Li Ka-shing, one of Hong Kong’s richest tycoons, are betting on the meat’s success — as are massive investment funds such as SoftBank and the Singapore government’s Temasak.

Cell cultured burgers, chicken tenders and other breakthroughs are still a year or more away from landing in restaurants and grocery stores, experts say, but current events have heightened the urgency to develop more choices for meat.

The COVID-19 pandemic exposed flaws in the conventional meat industry after workers at processing plants in the U.S. and Europe suffered massive outbreaks of the disease and the industry’s supply chain buckled under the crisis, leading to shortages, price hikes and purchasing limits.

Critics of conventional meat say the virus provides one more reason to turn away from an industry that has wreaked havoc on the natural environment, served as a vector for infectious diseases like salmonella and E. coli and, through its rampant use of antibiotics on crowded and inhumane factory farms, undermined human health.

But it’s not entirely clear whether cell cultured meat is safer and healthier. Companies are loathe to share data, choosing instead to operate in secretive silos to protect their intellectual property. Shiok denied a request to view or taste-test its raw product for this story, citing a pending patent. Bethencourt later provided The Times with video of the company’s lab-grown shrimp cells under a microscope.

The environmental benefits of clean meat could be significant. The Good Food Institute estimates cell cultured beef will cut the amount of land used by cattle to produce regular beef by 95% and the amount of emissions by at least 74%.

That could certainly win converts, but it’s how the meat tastes and feels that will ultimately determine the industry’s success.

“Not all companies who make this are created equal,” said Chase Purdy, an expert on cultured meat and author of “Billion Dollar Burger: Inside Big Tech’s Race for the Future of Food.”

Purdy tasted lab-grown foie gras, duck chorizo and ground beef but nothing impressed him more than a chicken tender made by Berkeley’s Memphis Meats, with strands of muscle that peeled apart with startling authenticity.

“It’s really hard to get cells to grow in that linear, structured way,” Purdy said.

That might be the exception. Anyone hoping for a facsimile of a dry-aged Porterhouse steak or a loin of Berkshire pork crowned with a sheet of crackling might have to make do with ground meat — much easier to replicate — for tacos, pasta sauces and burgers for some time.

Re-creating recognizable butcher cuts with complex layers of muscles and fat (think of the patchwork of beef chuck or the mosaic of fat and muscle on the rim of a rib-eye) remains the elusive grail for the industry — one that’s being tackled by several companies.

“We’re still at the prototype stage, showing proof of concept and proof of value,” said William Chen, the Michael Fam Chair professor and director of food science and technology at Nanyang Technological University Singapore, which is working on growing steak. “Think of it as a car. We’re able to make a basic sedan. But to make beef steak, we need to build a racing car.”

The simplicity of shrimp is what drew Sriram, 35, to the crustacean, which unlike beef, pork or chicken comprises one uniform muscle. 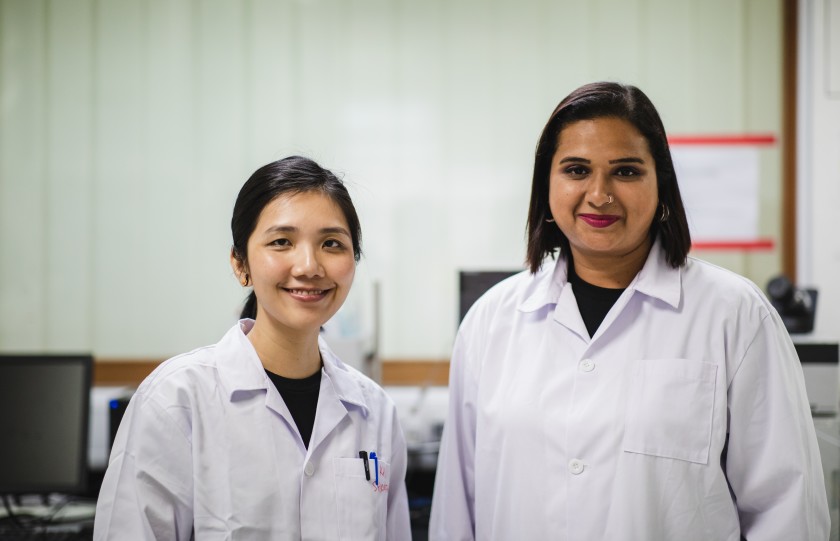 Being in Asia was also a plus. Shiok’s own surveys, and at least one study, suggest Asians are more willing to try novel foods like clean meat than people in the West.

A stem-cell biologist born in India and raised in the Middle East before moving to Singapore, Sriram was thrilled when she realized cell cultured shellfish was an open field.

Asia consumes three-quarters of the world’s supply of shrimp. And the industry’s notorious practices, which include slave labor, pollution and the overuse of antibiotics, convinced Sriram there would be a market for an alternative.

Shiok was founded by Sriram and fellow scientist Ka Yi Ling, 32. The pair initially struggled to find private lab space to rent, settling briefly at a marine institute on a mostly secluded island that required careful adherence to a ferry schedule, lest they wanted to stay a night alone on the eerie redoubt.

By 2019, the pair had moved out and developed a prototype that required Sriram, a vegetarian, to eat shrimp for the first time so that she could compare the two.

“I could definitely smell and taste the ocean,” she said of the creation.

Driving down costs remains the biggest hurdle. Shiok’s proto-shrimp costs $5,000 a kilogram, which is about $2,268 a pound, mostly due to the price of the nutrient fluids needed to feed the cells. Access to more affordable nutrients has reduced the cost of Shiok’s meat to $3,500 a kilogram, or about $1,588 a pound. The goal is to make Shiok’s shrimp 100 times cheaper by the first half of next year.

Unlike the U.S., Singapore has developed regulations for the sale of cultured meat.

The tiny Southeast Asian country, whose entire width is the distance between Burbank and El Segundo, has supported the technology with tax breaks and grants to bolster a government campaign to break the country’s near-total reliance on imported food by 2030.

“Singapore is doing more of its own investing and is the most receptive from a regulatory angle to greenlighting this to go to market first,” Purdy said. “It will likely be a restaurant in Singapore that serves this up to consumers for the first time in history.”