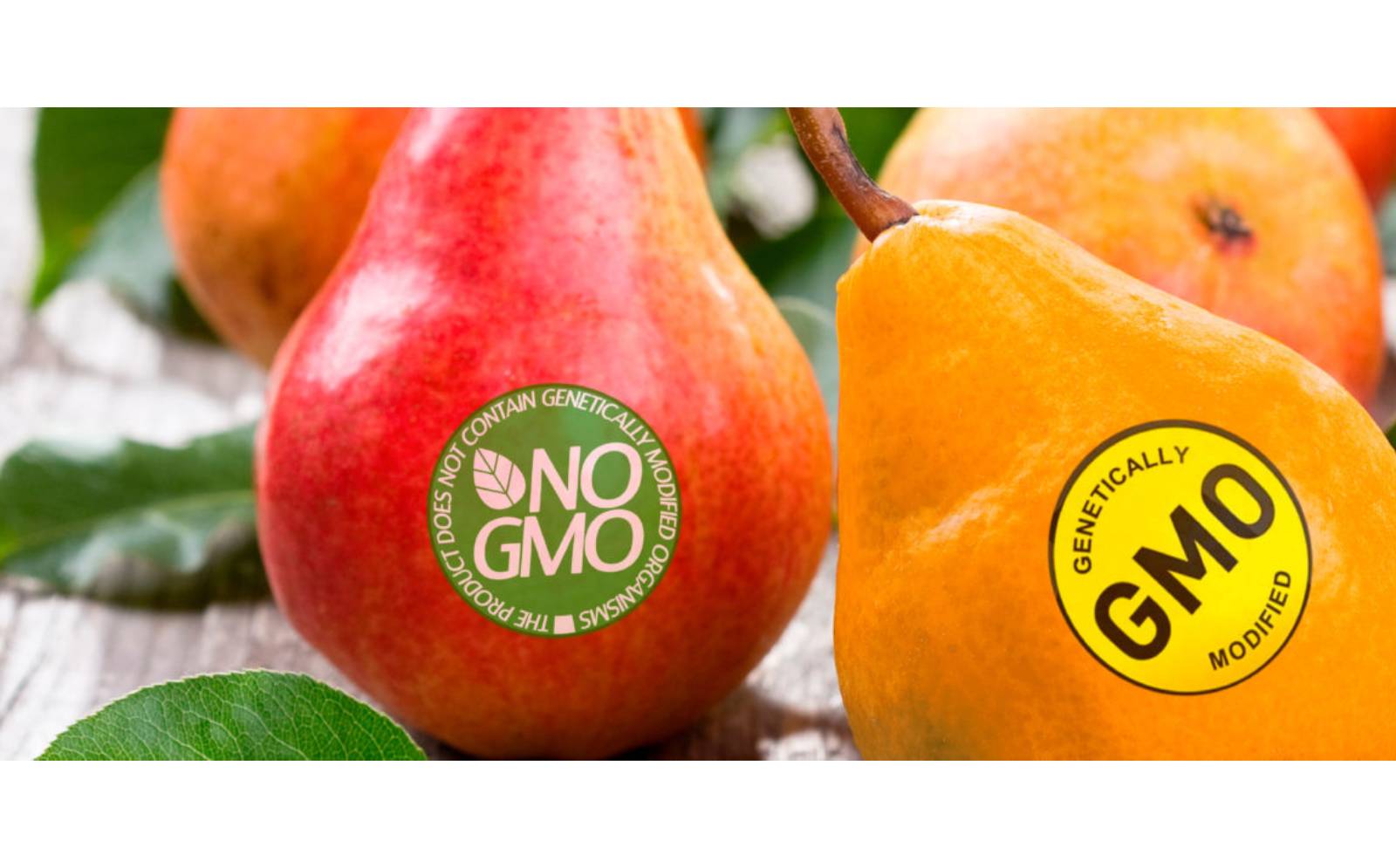 GMO refers to genetically modified organisms—living organisms with genetic material that has been artificially manipulated with genetic engineering. The majority of GMOs have been engineered to withstand the application of herbicides or to produce insecticides, to avoid spraying the fruit with various pesticides. This happens by altering the DNA and embedding pesticides or herbicides directly into the crop. The alteration of DNA follows the process of selecting a desirable gene sequence from another organism and inserting it into the target crop’s genome. Another common application of GMO is to improve the quality and nutritional profile of crops. This technique is often used for the production of animal feed, biofuels, or “cash crops” like corn, cotton, or soybeans. Examples of some of the most successful genetically modified foods include corn plants that are capable of surviving drought, soybeans that resist herbicides, potatoes that don’t bruise, virus-free papayas, and genetically modified salmon that grow to their full size at twice the usual rate.

GMOs are often misconstrued as “unnatural” products. However, there is a difference between cisgenic and transgenic mutations. Cisgenic implies that a gene has been inserted from another species that is closely related, whereas transgenic describes the transfer of genes from an unrelated species. Transgenic manipulation is the only genetic modification technology that is able to produce an organism that could not occur naturally.

How do I know if I am eating genetically modified food?

A common misconception is that hybridization of two fruits or vegetables is a GMO. Products like seedless watermelons, baby kiwis, or pluots are not created through genetic engineering technology but through controlled cross-pollination and breeding. Most types of produce are very different from their wild ancestor, and even organic varieties no longer resemble their wild type. This is because over many generations of selection, the plant’s genetic make-up has changed. For example, below is an image of watermelon in the 17th century compared to modern watermelons. This often causes the confusion surrounding what foods are genetically modified, and which have evolved “naturally”.

How do GMOs affect our health?

To date, there have been no epidemiological studies investigating the effects of genetically modified food on human health. This is what makes the safety of GMOs a contentious scientific topic.

One of the biggest concerns that has been vocalized by the public is that people fear that their own DNA could be changed by eating GMOs. This is an extremely unlikely scenario, as certain enzymes in the human body are designed to prevent genetic invasion. Only a microorganism with very similar DNA to your own, that happened to survived digestion, and happened to be at the right place at the right time in your body, could affect your genes. The risk of genetically modified foods causing a mutation in your genes is no more likely than with non-GM foods; both contain DNA that is “foreign” to your own genome.

Another common concern is that genetically modified foods could cause allergic responses, toxicity, or organ damage. Scientists across the U.S. have sought to test possible toxicity or effects on organs caused by GMOs. The results showed no evidence that GMOs would cause adverse health effects on the organs. Similar experiments were run to test the effect of GMOs over time and across several generations. They found no indications that GMOs were to affect fertility, embryos, or offspring. These experiments were not conducted on humans, and thus carry some level of uncertainty. Nonetheless, the likelihood that GMOs would negatively affect the human body through consumption is very small. 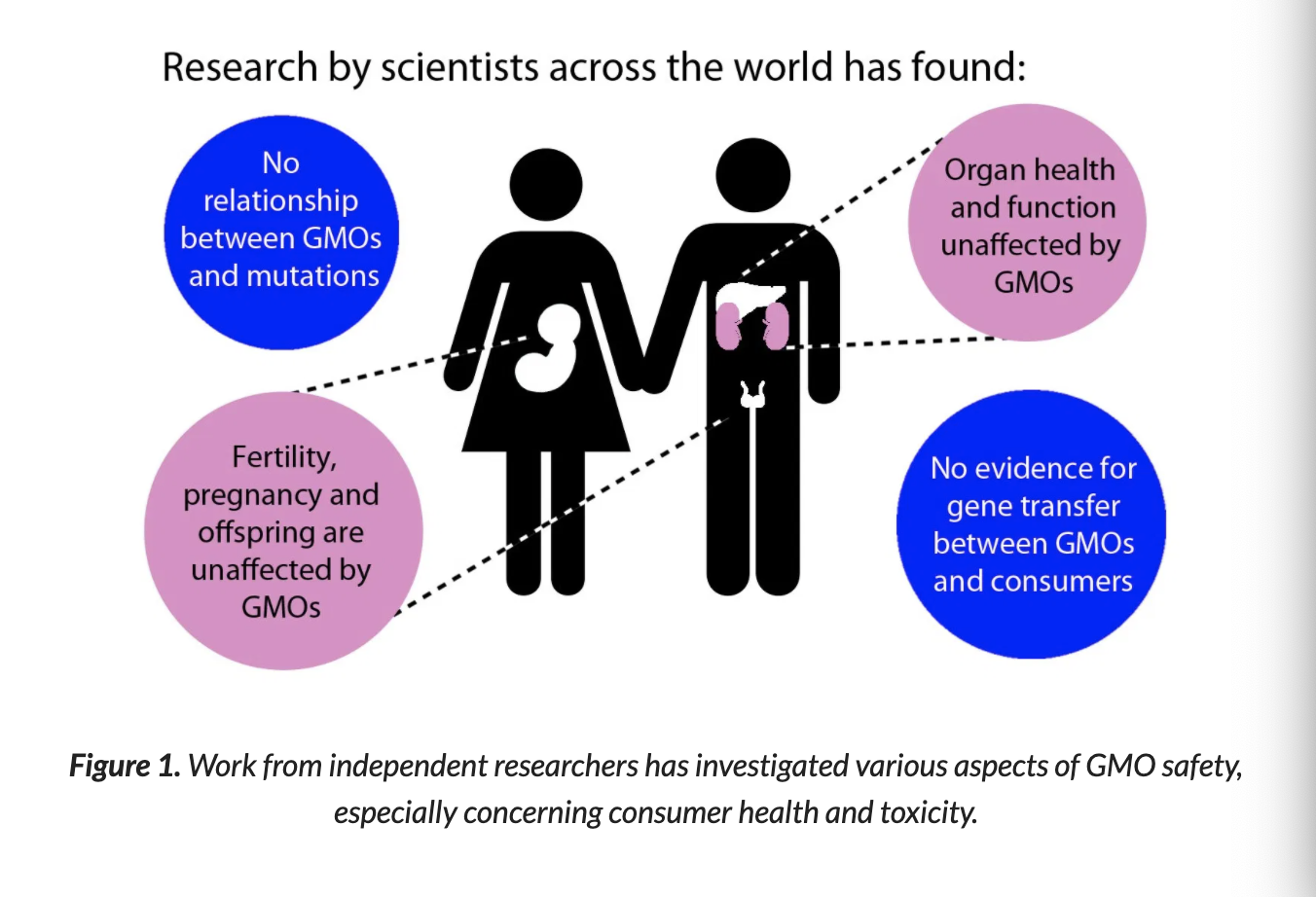 How does lab-grown meat fit into genetically modified foods?

How could GMOs be used in cellular agriculture?

One use of genetic engineering in cellular agriculture is for hemoglobin. Yeast, which is often used in breweries and wineries, can be genetically modified to produce hemoglobin proteins. Hemoglobin is a protein containing heme, which carries oxygen through the bloodstream from the lungs to the rest of the body. Isolated hemoglobin creates a more “meat-like” color and taste for lab-grown meat or plant-based meat products. The repurposing of yeast cells through recombination to produce specific enzymes or molecules is not a new technology; it has been used to generate insulin and other pharmaceutical drugs. It is also an important method that will be used in cellular agriculture products to produce various animal products, whether it’s milk proteins, egg proteins, or collagen.

Genetic engineering has brought many benefits to food production such as increased crop yields and reduced use of pesticides. If cultured meat products end up utilizing genetic engineering, it will pave the way for greater production efficiency and improved food quality. Despite the confusion and stigma surrounding genetically modified foods, governments continue to take steps to instill trust and ensure safety through research and proper label laws. As the public becomes more aware of lab-grown meat, the government will ensure the same safety.

Hi, I’m Jasmin! I’m an undergrad at MIT studying chemistry and I am very interested in the development of sustainable food alternatives. I have immersed myself in the lab-grown meat and plant-based industry, and am excited to share what I have learned with you.